I have finally gotten around to re-reading this classic on the art of drama. Have to say I still find his use of the term "imitation" as confusing as I did when I first read the treatise for a philosophy course on Aesthetics at college. But there are many comments on plot, character, theme, action and so on that are truly incisive and, more to the point, useful. Many modern screenwriters swear by this work. Here's a bit I rather like (Poetry meaning all forms of fiction as we know it and the poet being the writer): It is not the function of the poet to relate what has happened, but what may happen - what is possible according to the law of probability or necessity ... Poetry, therefore, is a more philosophical and a higher thing than history; for poetry tends to express the universal, history the particular. A nice rebuttal to people who believe that a work of non-fiction is somehow more valid or valuable than a novel.
By OR Melling at August 28, 2009 2 comments: 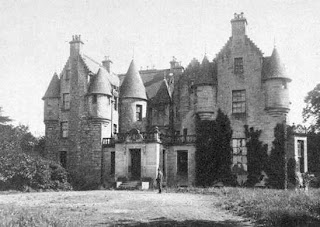 One of the many fabulous things about the Akashi Records or the Great Library (also known as the World Wide Web or the Internet) is that you can find pictures of the things you create in your head. Here more or less is the big house at the centre of the novel I am writing at present. By no coincidence but, of course, magical synchronicity, it is indeed a Scottish baronial house. In my book it stands on a craggy peninsula on the west coast of the Isle of Lewis, in the Outer Hebrides. 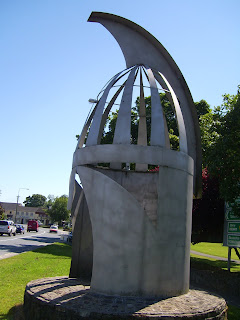 I've blogged before about public artwork around Ireland which reflects its mythological heritage. This helmet piece is one I often pass when travelling north. It's beside a traffic roundabout just outside of the town of Ardee, the anglicised name for Baile Atha Fhirdhia or the Ford of Ferdia. Those of you who have read The Druid's Tune - my very first book, based on the Táin Bó Cuailnge, Ireland's greatest epic tale - will recognise the name. Ferdia was Cúchulain's foster-brother and best friend. The two were on opposite sides of the cattle-raid conflict between Ulster and Queen Maeve's Connaught and they wound up fighting in single combat for four days at the ford. Ferdia died by his friend's hand and Cúchulainn wept over him. This was one of two truly tragic scenes in the tale, the other being the slaughter of the Youth Troop of Ulster. (Apologies to the designer/artist but I've been unable to find a name. If anyone can let me know, please do.)
By OR Melling at August 17, 2009 No comments:

Lovely review from SLJ just in today for the American edition of The Book of Dreams: "lyrical writing and exquisitely detailed descriptions of the Faerie world and geographical locations in Canada." Sweet balm to the wounded after a brutal review from Kirkus: "a skeleton of a story." (Some skeleton at almost 700 pages.) One of these days I'll learn to ignore reviews. As James Joyce himself observed, whether good or bad, they are all subjective opinion. There are no authorities on fiction, only readers who like or dislike what you have written. Truth to tell, but, I will always be delighted when I get the thumbs up from the younger generation. One book blog - in BetweeN the pages - gave BOD five stars. Here's their rating system: 1 star - use as doorstop, 2 star - bearable while on pain medication, 3 star - read once, do not repeat, 4 star - definitely keep it on your shelf, 5 star - use as altar. It doesn't get better than that!
By OR Melling at August 12, 2009 3 comments:

Life in the High Street

Not long back from London where I was wined and dined by my fabulous producers Dawn and Keith Thompson of Diplomat Films: www.diplomatfilms.com. They have taken an option on my new young adult series based on Celtic mythology, for a live-action fantasy show. (Watch this space.) It all began with a dinner party at Helen Worth's (Gail in Coronation Street); the food and the craic was only mighty. Christopher Biggins who won I'm a Celebrity Get Me Out of Here last year told me he loved my hair. I know I'm name-dropping but it was hilarious fun. Next day we went to a play at the Soho Theatre by a London-based Irish playwright Stella Feehily called Dreams of Violence. It reached its highest point when Paula Wilcox - as the has-been pop star now in her 60s - belted out her old hit in terrific style and then slowly but surely disintegrated as the reality of the present sank in. Brilliant stuff. After the show we went for supper in The Ivy Club with doormen in tuxedos and bowlers. Ah, the life to which I would love to become accustomed! Yes, there were business meetings in there as well and all be revealed in due time.
By OR Melling at August 04, 2009 No comments: