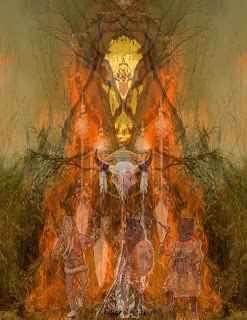 As many of you know, Samhain marks the beginning of the Celtic New Year, a threshold time when spirits walk, the doors of Faerie open, and the dead speak to the living. This ancient pagan festival is, of course, now celebrated as Hallowe'en. Here is a gorgeous image I found on the Web that perfectly represents the true spirit of this festival and feastday. For more of the artist's amazing work go to: www.crystalwolfeblends.net and click on artwork.
By OR Melling at October 30, 2007 2 comments:

Fort of the Oak Trees 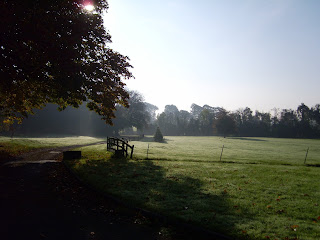 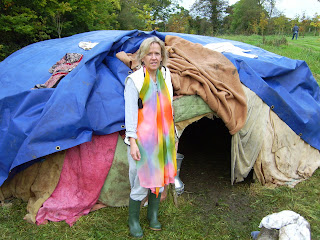 Here are some pics from my week away. The beautiful landscape is directly in front of the big house at Dunderry. The sweatlodge is used at night under the stars. Everyone piles inside with hot stones steaming up a spiritual sauna. Amazing stuff; magical experiences which I am writing up for my work. Will post more pics on the Blog over the weekend. I'm also frantically preparing for my trip to Canada!
By OR Melling at October 26, 2007 No comments:

Away with the Fairies

Again. In a big country house in Co. Meath for a week doing research. It was FABULOUS. Did a course in advanced shamanism which included a sweatlodge, firewalk (bigger and longer than previous two), spirit boat, trance dance, holo-shamanic breathwork, night-stalking on Tara, and more. Pics to follow. I was transported. And - no kidding - a couple of real-life soul-shaking fairy experiences that will go directly into my work.
By OR Melling at October 25, 2007 3 comments: 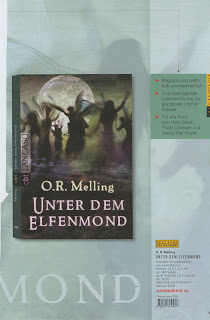 Here's the German edition of The Hunter's Moon as presented in the Spring catalogue of Bertelsmann (Random House Germany). I love the look and sound of the title which means "Under the Fairy Moon". They use a special hardbacked soft cover in Germany, if that makes any sense. (It has a two-page spread but blogger won't upload two photos right now).
By OR Melling at October 17, 2007 5 comments:

This just in from my publicist at Abrams: "The Light-Bearer’s Daughter by O. R. Melling has been short listed for the Green Earth Book Award in the Young Adult Fiction category. The Newton/Marasco Foundation - in partnership with Salisbury University, Maryland - created the award to promote books for young people that best raise awareness of the beauty of our natural world and the responsibility that we have to protect it. The prize will be announced December 15." Fingers and toes crossed!
By OR Melling at October 16, 2007 1 comment:

As well as suggestions offered by some of my favourite bloggers - see comments on post below (thanks, guys!) - mythic fiction writer and Endicott editor, Midori Snyder, sent me the following titles: Stormwitch by Susan Vaught, Nalo Hopkinson's Brown Girl in the Ring and Midnight Robber, and Walter Mosely's 47. "All brilliant YA's with African American and Caribbean heroines and heroes and mythology." I'll send these to my reader directly in case she doesn't read my blogs; but I still hope she gets writing herself!
By OR Melling at October 12, 2007 No comments:

I received an amazing email recently from a reader in America. Here's her question in brief: The thing I wanted to ask was how come there are never any black/african-american characters ever represented in faery tales or in stories having to do with faery? Maybe it's the setting or place, but even though I know it's more of a european thing. I really enjoy the stories, the myths, the legends, and I love faeries. I just hope one day I'll see a story where a black girl or boy can run into a silver-tongued mermaid, a fairy prince, or a ghost and is offered an seductive choice whether to walk into the unknown or not. Now, first of all, that is such a beautifully phrased and thoughtful question that I have encouraged this young woman to get writing the very kind of book she hungers for. However, she has raised an important issue. At a time when fantasy is not only the mainstream but indeed the biggest and bestselling section of children's and young adult books, why are there not books featuring main characters of black or brown skin engaging in fantastical adventures? More about this anon. I want to think upon it.
By OR Melling at October 09, 2007 4 comments: 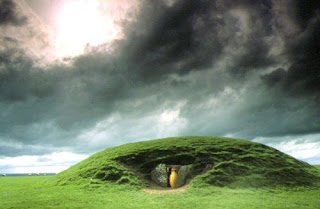 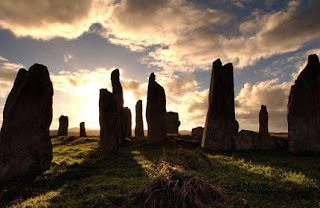 Any writer will tell you that it's not good to talk about new work in its early stages. Indeed, once upon a time, I talked so much about a new book that I talked it into oblivion! I had all the research, the notes, the ideas, the theme, the plot, the characters etc and I blathered on and on about it to everyone who would listen until after about two years I realised it wasn't being written. However, I can cheat a bit and show you pics from the settings of my two new works. The first pic belongs to the young adult book (which will be the first of a new series) and the second pic belongs to the adult book. They are both coming along so beautifully I could burst with happiness. I keep thinking one will supercede the other, but no, scenes and ideas keep arriving for both, so until that stops I will keep writing both. (Have never done this before. It's really quite thrilling.) Hmm, it looks as if they are similar but they are not. One is set in ancient Ireland and the other is set in the present day. All right, that's enough. Not another word. But, really, I am dying to talk about them. Will go write instead.
By OR Melling at October 08, 2007 4 comments:

There's no doubt about it: when a book wants out, like a baby being born, it just keeps on coming and nothing can stop it! Never mind peace and quiet and no distractions. Today I had six workmen tramping in and out of the house, drilling in the porch and also outside on the driveway, plus blow torches welding pipes and setting off the smoke alarm and there I sat at my PC (now in the bigger living room for a more expansive writing environment) working away, chapter after chapter. Three today and a fourth mapped out. This is brillo. That's the YA book. Now back to research notes and early chapters of the adult one. Oh, and all the racket? New gas pipes going through the entire neighbourhood. Utterly necessary as these houses were built in "the Year Dot" as the foreman said to me.
By OR Melling at October 03, 2007 3 comments:

Yes, I am happy to report that I am slow to blog these days because I am working away on my two new books. So far, so good. I've mapped out the first of a new YA series chapter by chapter - 23 so far - with titles for each (a new one for me). Now I am blocking out the chapters and writing first draft material with two chapters done so far. Hoping to block out a chapter a day but that may be too ambitious given that I have a load of house and business stuff to do, e.g. clearing out bookshelves, renovating shed, writing my speech for the event below, writing a paper for a book about Narniahhhh. Meanwhile, I am making notes and doing research for my adult novel. Very exciting. I know I am on the right path with these books as synchronicity - that long Jungian word for 'magic' - is already occurring for both. The YA book features Tara in a central role and, as you know from my Blog, I ended up there recently! The adult book takes place in the Outer Hebrides, which I visited two years ago, and some of the research is making the hair stand up on the back of my neck, because it points to exactly what I want to write about!!! (Sorry, can't be any more specific than that. As all writers will tell you, it's dangerous to talk about a work in its early stages. Like fairy fabric, it's weave if delicate and all too frangible. )
By OR Melling at October 01, 2007 No comments: