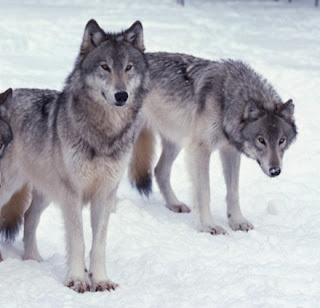 I love them. And I much prefer the Native American attitude towards them - "our brothers, like the dog" - as opposed to the European one so familiar in fairy tales, i.e. they are an evil enemy. It's interesting to see that modern urban fantasy continues this agricultural prejudice. Wolves are evil in the Chronicles of Narnia and more recently in Philip Pullman's His Dark Materials. (The daimons of the 'evil' Tartars guarding the Experimental Station are wolves.) Not in my books! The she-wolf is a guide and protector in The Light-Bearer's Daughter and another wolf plays a central role in The Book of Dreams. Oddly enough, my own last name means 'wolf' (not my pen-name) and I live on a street called 'Wolfe'. Coincidence? Hah!
By OR Melling at January 30, 2008 7 comments: 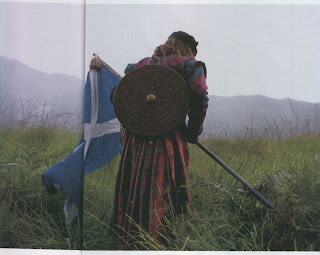 Hoot mun, it is. This is the day Scotland celebrates the birth of its national poet, Robert Burns. At parties held in his honour, they serve up haggis which Rabbie called 'Great Chieftain o' the puddin'-race.' It's a mash of sheep's heart, liver and lung mixed with toasted oatmeal, onions and seasonings all boiled up in a sheep's stomach. (Yum, says this vegetarian.) The haggis is piped into the room by a fully-kitted bagpiper and everyone cheers at the sight of it. My guess is, there's plenty of cheer drunk beforehand, bottles of good strong Scotch, before they tuck into the fare. And to finish off this post, a pic of a fine broth of a Scots lad on the battlefield of Culloden.
By OR Melling at January 25, 2008 No comments:

One of the great things about the Green Earth Book Award (along with them flying me over to Maryland for a book festival to receive my prize) is that I get to name an environmental agency who will also receive prize money. It wasn't hard to pick one. I've chosen The Golden Eagle Reintroduction Project which I list in the glossary of The Summer King. As mentioned in the book, the golden eagle was hunted to extinction in Ireland, and that extinction was still a fact when I wrote the first edition. You can imagine my delight at discovering, when writing the new and expanded version, that this was no longer true! Just like Mrs Sootie Woodhouse says in The Light-Bearer's Daughter: not all that is gone is gone forever. Do have a look at their site. There are gorgeous pictures of eagles and also red kites and other raptors. http://www.goldeneagle.ie/. Come to think of it, given that the eagle is such an important bird to Americans, it's fitting that American support goes to this project.
By OR Melling at January 23, 2008 2 comments:

Here are the books I have read this year (so far):
The Last of the High Kings, by Kate Thompson
alice macLeod, reAliSt at LAst, by Susan Juby
The Gathering, by Anne Enright
South of the Border, West of the Sun, by Haruki Murakami
The Wind-Up Bird Chronicle, by Haruki Murakami (re-reading and still reading)

Here are the books I am reading for work, as it were:
Aristotle's Poetics
Boethius's The Consolation of Philosophy
One Hundred Lamps for the Soul, Celia Haddon
Rumi, Gardens of the Beloved, Maryam Mafi & Azima Melita Kolin

Write and Be Damned

I cannot tell you the number of successful and even bestselling authors who have told me recently that their latest books have been turned down by their publishers. It is a worrying trend. This was the crux of my key-note speech at a conference in Toronto before Christmas. The publishing industry grows more corporate and rapacious by the day. Also more inefficient and economically insane. I truly believe that the average writer is paying for all those giant mega-deals and mega-publicity payouts for the wannabe Rowlings (wannabe on the part of the publisher, I mean). The Rowling phenomenon cannot be repeated, yet, like addicted gamblers at Las Vegas, the publishers keep trying to create "the next big thing". The end result? Just like those addicted gamblers, they are damaging everyone's livelihoods and the book trade itself. For those of us who still believe in the art of writing, as opposed to flogging our dreams in the marketplace, there can be only one defence. We must stay true to ourselves and the stories that are whispered to our souls.
By OR Melling at January 17, 2008 11 comments:

Keep meaning to blog about the Hollywood strike and express my support for the writers. The dispute is actually more sinister than it appears. The producers not only hold an immoral position - refusing to give just the littlest piece of the pie to the original creators - they are, in fact, trying to break the union. I think L.A. itself should go out on general strike against the gazillionaires who are holding the movie industry and therefore the city to ransom.
By OR Melling at January 16, 2008 1 comment:

I won! I won! I won! (I am so mature.) Ach, but I am utterly thrilled. I've been informed that "the panel loved the book [The Light-Bearer's Daughter], thought it was incredibly well written, and loved the strong environmental stewardship message." They are flying me to Maryland in April for the award ceremony which takes place during a children's and young adult literature festival at the University of Salisbury. Will post more when I get more information, as their website hasn't been updated yet. Brilliant way to start the year along with the Top Ten list, eh? Now back to work.
By OR Melling at January 11, 2008 8 comments:

Music of the Spheres

Synchronicity is a big word for magic. I'm working away on my new book, The People of the Great Journey, which has a final mystical scene involving the moon and my main character. Onto the radio, RTE JK's Ensemble, comes this song which reduces me to tears, it is so exquisite. I write away to find out what it is. I am told of Savina Yannatou, her album Terra Nostra (New World), and the title of the song: With the Moon I am Walking.

Remember last year The Hunter's Moon was named to the American Library Association's TOP TEN FANTASY FOR YOUTH? Well I've just been told that The Light-Bearer's Daughter has been named to their TOP TEN YOUTH BOOK ON THE ENVIRONMENT. Wa-hoo! I'm so excited and delighted. As soon as I am sent the full list I will post it on my website under Young Adult Books, USA. Meanwhile, I am still waiting to hear how the same book has fared with the Green Earth Book Award for which it has been short-listed. Fingers crossed, they will be naming the winners soon.
By OR Melling at January 03, 2008 No comments:

It's up! Go look: www.ormelling.com. My gorgeous new website. A great way to start the new year which promises all sorts of wonderful things including the publication of the last Chronicle of Faerie in America (Fall Season), a new book being written, and something equally amazing which I can't talk about yet. Watch this space. Meanwhile, like the two-headed god Janus for whom this month is named, I am looking backward and forward in order to thank two brilliant webmasters: Piers who created my very first website and Terry Findlay who is my new webmaster. Thank you both!
By OR Melling at January 01, 2008 6 comments: