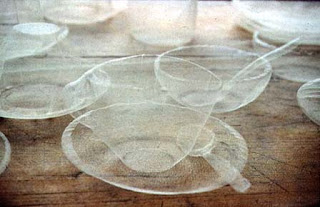 I was doing some research on weaving for a character in my new young adult series and I discovered this amazing website: www.fiberarts.com. (Imagine spelling 'fibre' like that.) Actually I was looking through their magazine to which my artist sister Pat Burnes subscribes and that led me to the website. I love this piece by Jenny Lawrence, called Remembering Community II: Living Alone, 1999, nylon tulle on wood tray, fabric manipulated by thermoplastics. A desire and an idea is growing in my mind. I would like to learn how to weave on a loom. Have added that to my list of must-do-before-I-die.
By OR Melling at October 18, 2009 1 comment:

I had an incredible dream a few nights ago. I was in a big room in a skyscraper, like a newsroom, with desks and computers and wide glass windows. I looked out at the street and saw this marvel: four or five men were carrying tall poles that bore a huge ashen mass above them, like a dark cloud. It was thick but not solid, it kept moving on top of their poles and it was shedding bits here and there. There was a theatrical sense to the image, as if the men were mummers or maypolers on parade. Also a kind of Tarot or occult feel. Even in the dream I knew I was looking at something wondrous. On waking, I was reminded of lines from one of my favourite poems by Wallace Stevens:
These are the ashes of fiery weather,
Of nights full of the green stars from Ireland,
Wet out of the sea and luminously wet,
Like beautiful and abandoned refugees.
I believe the dream has to do with my new book, the adult spiritual novel I am writing called People of the Great Journey. In fact, I've added the image into one of the last chapters. I'm almost finished the penultimate draft. Only three more chapters to go. Then I have to do a final draft. It's already 331 pages. A big work. I'm curious to see how it will be received. Whenever you go too close to matters of the soul in this place - I mean on this planet - there is always fall-out. The materialists rule. For some reason, most of us do not want to be reminded that we are souls exploring physical reality, unless the reminder is packaged safely in a religious format. (Indeed, organised religions are materialist in practice while purporting to serve the soul.) Artists who work in 'the smithy of the soul' are often sidelined, e.g. Sharon Butala below who is, I believe, Canada's greatest writer and not recognised as such.

I know I'm a Luddite - I was the last person in Ireland to get a mobile phone - but I hate the idea of e-books. A real book involves paper and a cover and smells nice. I figure any agreement to have one's work in e-book form is like being forced to dig one's own grave before being shot. This is the death of the book as we know and love it. I wonder what would happen if authors refused to allow their books be digitised? (Aside from their agents slapping them on the back of the head.) I'm seriously considering it myself. I know it's loss of income but I don't put money over principles and I don't fear being poor since that is what I am and have been all my life. The rise of the e-book is part of the global drive to de-humanise everything, to replace workers with computers, and to reduce organic reality and human interaction to one big digital interface that Google or Microsoft or some other corporate entity will ultimately control. At some point in the nightmarish future we are all going to be inserted inside a bloody machine, unable to speak to each other, only clicking and whirring in bangs and whimpers. Hmm, I feel a sci fi novel coming on.
By OR Melling at October 09, 2009 7 comments:

A wonderful interview Sharon did on Irish radio will be aired tomorrow at 11:00 a.m. Irish time on Dublin City fm 103.2. Those not in the country can hear it online at www.dublincityfm.ie. Sharon tells some amazing tales about her experiences with aboriginal spirits when walking the prairies alone. I'm reading Luna, one of her novels about women's lives in the West. This is the first of her novels which I have read and I am spellbound. It's like reading her exquisite non-fiction books about the land, but now you've got people too! Highly recommended. (Though I must say I'm a tetch annoyed with her publishers. I stumbled over a surprising number of typos. What happened to the copy-editor and proof-reader? A lot of publishers are getting very sloppy these days. Some of my paperback editions fall apart at the seams. Cheap production makes poor books.)
By OR Melling at October 01, 2009 No comments: