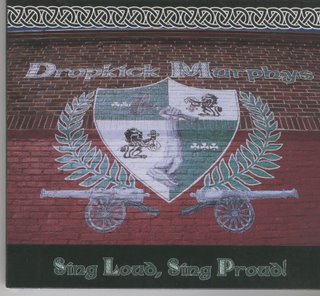 As I work away here, I am listening to Máire Breatnach’s exquisite album Coinnle na nAingeal (Angels’ Candles.) She is not only a fairy fiddler – you have to hear her violin, honeyed sounds from heaven – she also writes her own music and songs. Her website is www.mairebreatnach.com. She gave me permission to use lyrics from the song "Eist" in The Hunter’s Moon. I first heard the song on a compilation album, also called Eist [songs in their native language], mentioned below, and only later did I discover that it was inspired by the tale of a fairy king mourning his lost love. (Got prickles on the back of my neck from that.) I use it, of course, when Findabhair mourns the loss of her fairy king. One of the other songs featured in the book is a trad number covered by the Dropkick Murphys (great name, eh?) from their album Sing Loud, Sing Proud. Here’s a pic of the CD cover and here’s their website: www.dropkickmurphys.com. They’re real Irish-American working-class union-family boyos. You have to hear their version of "Rocky Road to Dublin." Talk about frenetic. No wonder the leppin’ leprechauns love it!
By OR Melling at July 30, 2006 No comments:

That means 'listen' (or 'listen up' as we used to say in the Navy) and there should be an accent on the e like this - éist - but my PC won't do it on capitals. ANYHOO, I want to talk about music. I love the way Charles de Lint always names the music he listens to when he is writing (though I have never heard of any of the groups he mentions). All through the writing of The Summer King, I wore out Howard Shore's Lord of the Rings Suite. I love Howard Shore. (He's Canadian. It is the duty of Canadians to know when someone is Canadian and to let everyone else know.) For The Light-Bearer's Daughter, I appear to have gone completely Gaeilge, playing non-stop Eist [songs in their native language] with a variety of artists including the likes of Kate Bush (singing Mná na hEireann and doing a great job) growly-voiced Van Morrison, and Altan; Eist Arís (listen up again) including Capercaille, Clannad, The Chieftains - and Paul Brady breaking my heart with Bruach Loch Pontchartrain (ah, New Orleans); Ailleacht (beauty) by Pádraigín ní Uallacháin. I am hoping to get permission to use a song from the latter in the book.
By OR Melling at July 22, 2006 No comments:

I'm very excited and thrilled with how the new version of The Light-Bearer's Daughter is coming along. After all that gasp and struggle at the initial stage, when I picked it apart and wasn't sure I could put it back together again. Oh, like The Summer King, it will be a hundred times better! And I've realised what book is the bright shadow behind it, the book that is its soul: Ray Bradbury's The Martian Chronicles, which originally inspired the boggles' golden eyes. Now I've re-read it for the first time since I sat down in the great library in San Francisco (in my bare feet) so many years ago and spent the day reading it. What a beautiful lyrical poetic writer! What a classic! First published in 1951. Well, in re-reading it I have been further inspired by it. Most of all, the meeting between the mortal and the fairy queen will reflect that incredible meeting between the Martian and the Earthling.
By OR Melling at July 19, 2006 3 comments:

Author in the Wild 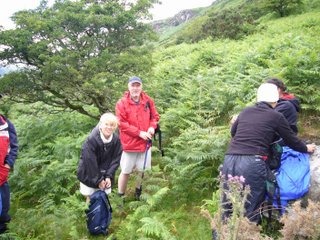 Yes, it's get-out-into-the-mountains-and-do-research time again! Here I am with a new hiking group. That's Gerry the leader behind me. That's me with the hair matching my shorts and jumper (I like to co-ordinate, even in the wilds). Behind us both is a hawthorn tree, also known as a fairy tree. We hiked seven hours around Lough Dan in the heart of the Wicklow Mountains, having danced till 2:00 a.m. the previous night. (Okay, I'm bragging.) Belated thanks to Eddie McGovern, fellow hiker and Cavan man, for this pic! The week before I was hiking in the Glen of the Downs with my friend, Victoria, and just yesterday I climbed the Powerscourt Waterfall with my sister, Pat. All these settings are in The Light-Bearer's Daughter which I am now re-writing like mad. Deadline date: August 15. Will she make it? Hmm.
By OR Melling at July 13, 2006 No comments: 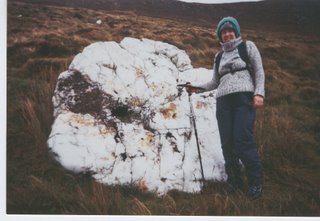 They were halfway up the mountain and in sight of the gray crag, the King's Cave, when they came upon a massive quartz boulder she remembered from the guidebooks. An Réilt, the islanders called it, the Star. (The Summer King, revised edition, 2006.)
Yep, that's me on Slievemore, "the Great Mountain" on Achill Island. Readers ask me are the places in my books real. Yes! My sister, Pat, fellow hiker took the photo. Higher up, fierce winds nearly blew us off the mountain. My woolly hat with red and green Mayo colours got blown into the Atlantic Ocean. It's well my head wasn't in it!
By OR Melling at July 11, 2006 No comments: