The Secret History of the Mongol Queens

I read this book by Jack Weatherford a while back as part of my preparations for an upcoming trip to Outer Mongolia (more about that anon). It's an amazing if at times horrific tale, i.e. what happened to the subsequent generations of women after they lost power. But Genghis Khan's love and respect for his daughters is astonishing to read - he put them in charge of all of his territories while he kept his sons by his side for battle - not least because we are not told this by other writers in the field. You would think there were no Mongolian women, never mind Mongolian queens, if you go by John Man's version of Mongolian history in his supposedly definitive Genghis Khan: Life, Death and Resurrection. Sadly and annoyingly, Man [have to laugh at the symbolic name] is simply carrying on the male tradition of excluding women from historical records. Weatherford describes in his interview how large chunks of The Secret Life of the Mongols - the 13th century record of Genghis Khan's life - were removed by later Chinese historians, those chunks being specifically about Genghis Khan's daughters and how he honoured them. The other thing I love about this interview is the author himself. What a lovely man - intelligent, erudite, humble, respectful of the Mongolian people and their language, culture, and history, and so indignant on behalf of the women who have been cut. And it's a great read, by the way, as exciting as a novel though harrowing at times. 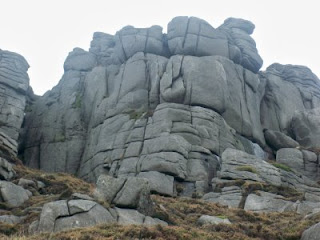 Here is a pic I took a few years back when hiking in the Mountains of Mourne (well worth all their mention in songs and poems!). You can see that even if castles or giants didn't exist, fantasy writers would have no problem inventing them with such natural inspiration. These are perfect for any stone fortress, witch's lair, eagle's eyrie, Seige Perilous, Westernesse outpost ... you get my meaning. Are we really surprised at the kind of mythic fiction that comes out of these Celtic isles?
By OR Melling at July 18, 2013 No comments:

Right, if anyone else out there is reading this daft and ingenious book, do get in touch. There are so many incredible things about it, including this black page to denote grief. Laurence Sterne broke all the rules of the novel long before James Joyce did and yet people went on writing in the conventional standard mode as if he and his marvel of a book never existed. Of course he was born in Ireland, of Anglo-Irish stock, but the English have claimed him, the way Americans are always claiming notable Canadians. (Harrumph.) It takes ages to read. Over a month later, I'm not even a third in. There was an entire legal section in Latin to wade through, not to mention the hundreds of minute digressions he takes as he tells his story. He is supposedly telling the tale of his life but a good chunk of the way in I am still at his conception. (Every time I am about to give up on the book he says something outrageous or hilarious. No prudery of the Victorians here!)I have dipped in and out as well, so came across more astonishing breaks with form, e.g. he writes about Mrs Wadham and decides his readers can fill in her characteristics themselves. So there are several blank pages with chapter numbers on top. Oh and very early in the book he says something in a huff and tells you to leave if you don't like it and then does something like this ________________ shut the door _______________ to put you out, ha ha. The book was published in 1759 and was all the rage by 1760, so his society did appreciate it. He was quite famous, after being a poor parson. But it seems the following generations haven't recognised or valued his ground-breaking originality, which is strange given the cult of James Joyce's Ulysses. I only know two people who have read Tristram Shandy and they are both librarians.
By OR Melling at July 08, 2013 No comments: