Here's a video of a Firewalk at Dunderry Park, the centre where I did most of my shamanic studies and also which I return to as often as I can! This is the kind of work and play at the heart of my new book, People of the Great Journey. I have done three firewalks myself, one at Dunderry and two in the Wicklow Mountains. Absolutely love them. 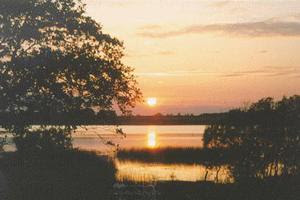 Off on Monday for a 2 week residency in a Franciscan Friary near Multyfarnham, Co. Westmeath. It is also near Lough Derravaragh, the place the children of Lir finally ended their exile as swans (cursed by their wicked stepmother) thanks to the bell rung by St Mochoneog. Fairy tale country and monastic life, ideal conditions for tackling a vital draft of my new adult book which I would describe as a work of spiritual fiction. I have no idea what the Friary will be like, but I read somewhere that it has a beautiful secluded garden with life-size statues of the Stations of the Cross. Will take pics when I am there. I'm really looking forward to this, not only because I will get to concentrate on my book without distractions, but also because I will meet new people, get cooked for (wa-hoo), and have interesting chats over meals and whatnot. It's not easy being an extravert in an introverted profession. (Sigh.) Photo credit: www.discoverireland.com.
By OR Melling at January 17, 2009 1 comment:

I'm reviewing the final pass of the American edition of The Book of Dreams, weighing in at a full 700 pages counting the glossary. (As opposed to the Canadian edition at 535. Don't know how that happened. I remember trimming, not adding, and no the print isn't bigger.) Have to say, despite the usual self-doubts and artistic torment, I think it's quite good. Meanwhile I am up to Chapter 5 of the penultimate draft of my new adult work. I'm quietly enthusiastic about that too, though I confess the book scares me betimes. Big ideas. Have I the skill to write them? I've got good news about my new YA book (first of a series of six) but I never count my chickens until the contract is signed. Those are the three books I am juggling at the moment. The film projects are more nebulous - at the idea, pitch, and treatment stage; but I am in contact with no less than two producers, one producer/director, and one director. Who says you slow down when you get older?
By OR Melling at January 13, 2009 2 comments:

I love him. He is such a holy madman, a true continuation of those wild-eyed, locust-eating prophets. I've read Food of the Gods and True Hallucinations as part of my research for the adult novel I am writing. Here's a brilliant quote regarding the Big Bang:
We are asked by science to believe that the entire universe sprang from nothingness, at a single point and for no discernible reason. This notion is the limit case for credulity. In other words, if you can believe this, you can believe anything.
By OR Melling at January 06, 2009 2 comments: 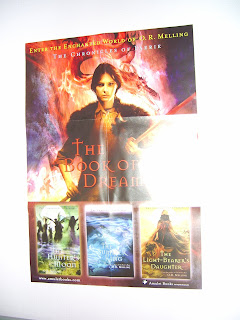 Here's one of the things I am looking forward to this year: publication of the American edition of The Book of Dreams. It will be interesting to see how it is received in the United States as events take place chiefly in Canada (as well as Faerie and Ireland). The three main characters of the first three books are featured - all older now - Dana, Gwen, and Laurel - plus a new gorgeous young man and a cast of thousands. This is the poster which my darling publishers have printed to celebrate the final book and the series as a whole. Sorry for glare, but it's full colour and glossy, so this is the best shot I could get of it. I'm utterly thrilled as I have always wanted a big poster and here is a dream come true thanks to The Book of Dreams! (Coincidence? We all know the party line on that ...)
By OR Melling at January 03, 2009 3 comments: