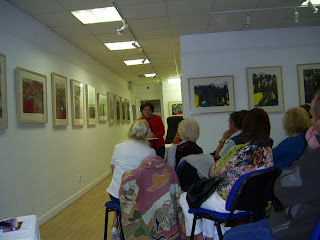 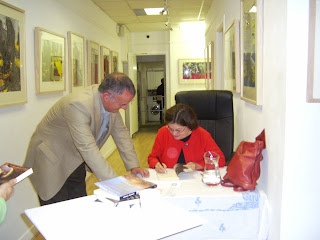 The author night was a great success. We had a full house, including people sitting on the window ledges. Glasses of wine and sparkling water were served. Sharon gave an amazing talk and took questions at the end. Books were sold - all the stock we had! - and signed. Everybody fell in love with one of Canada's finest writers. The next day Sharon went home to the Canadian West and Bray is still talking about her. People rang me, sent me emails and even stopped me on the streets to say "I could have listened to her all night!" She spoke of her beloved rancher husband Peter who died two years ago, of the lives of women on the land, of the aboriginal spirits who came to teach her as she walked the prairies, and of the tragic injustice done to the First Nations peoples when we took their land, which was also their soul. Many were moved to tears, but there was laughter as well. Have to say it was one of the most moving author events I have ever been to. My thanks to my sister Patricia Burnes of the Signal Arts Centre and the Centre itself - run by artists for artists - for hosting the evening.
By OR Melling at September 27, 2009 No comments: 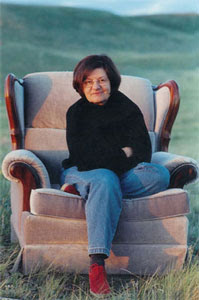 Dana spied a range of green hills ahead. As she crossed the stony field that lay before the hills, she discovered she wasn't alone. A woman walked there also, a rancher's wife dressed in jeans and jacket, with a scarf on her head. The woman was lost in her own musings, gazing up at the sky.
"This star-ridden, green and scented universe," she murmured.
The Book of Dreams

My friendship with Sharon Butala began with the writing of that paragraph, as I contacted her to ask for permission to put her in my book and also for permission to use the quote which is from one of her own books. Later on in my story, one of Dana's aunts, Deirdre, says "I'll be damned! You met Sharon Butala." And she and Yvonne talk about two of my favourite books by Sharon, The Perfection of the Morning and Wild Stone Heart. They are non-fiction books about the writer's relationship with the prairie landscape and the native spirits of the land. Truly beautiful works. She and I have emailed each other over the years and exchanged books. This month Sharon came to Ireland on a sightseeing tour and we finally met. In fact, I am hosting an author event for her at the Signal Arts Centre here in Bray this very evening: 7:00-9:00 pm, Albert Avenue, down near the Sea Front. Sharon will give a talk on her work and read from some of her books, including her latest The Girl in Saskatoon, about an unsolved murder of a beauty queen who was a classmate of hers back in the 1960s. Yesterday I spent the day with Sharon - brought her to Powerscourt House in Enniskerry - and I have convinced her to return to Ireland in the near future. I've spoken elsewhere about the magic of writing and how JRR Tolkien, noted linguist as well as writer, pointed out that the word "spell" means both a magical formula and a story told. Words have power. Words create reality. By writing about Sharon Butala, I ended up meeting her, just like my character. Magic. (Photo: Duane Prentice. http://www.sharonbutala.com/)
By OR Melling at September 19, 2009 2 comments:

Here's my little piece on the Barnes & Noble blog if you want to have a read: http://bookclubs.barnesandnoble.com/t5/Letter-Blocks/quot-A-Labour-of-Love-To-Comfort-Noble-Hearts-quot/ba-p/390144. It's a true story as my many siblings can confirm. I confess it's the same story - somewhat edited by B & N - which you will also find on the CANSCAIP site here: http://www.canscaip.org/bios/mellingo.html. Now I must get back to this deadline. Big news coming soon. Yes, I know I keep hinting but all will be revealed in due time.
By OR Melling at September 14, 2009 4 comments:

Got a lovely multi-page review of The Book of Dreams in the fabulous and fantastical online review site known as The Green Man. Here's the link if you'd like to read it: http://www.greenmanreview.com/book/book_melling_bookofdreams.html. Do have a roam around the site if you are not a regular viewer. It has depths and shadows and secret leafy corners where all sorts of magical things are happening!
By OR Melling at September 08, 2009 1 comment:

I'm still convinced the book should have been called Rebecca, not Ivanhoe. She is by the far the strongest and most admirable character in the novel. Apparently Scott himself stated somewhere that she was the one most worthy of Ivanhoe's love but marriage at that time between a Christian and a Jew was unthinkable. Here's the real question: Was Ivanhoe worthy of Rebecca's love? His anti-Semitism is rampant. The author describes his "contempt" for Isaac even as he helps him and the minute he hears Rebecca is a Jewess his eyes go "cold." Whereas, the passionate Norman Bois-Guilbert, by the end of the book, is willing to give up everything - wealth, title, power, ambition - for Rebecca's love. Despite his cruelty and arrogance, Brian is presented as a passionate and tormented man (crossed in love before Rebecca as it happens), intelligent beyond his time in the way he considers all religion foolish superstition and uses the term "bigot" for the Christian anti-Semites. Truly, the two most fascinating and original characters in this book are the conflicted Rebecca and Brian, and not your standard one-dimensional heroic types seen in Richard, Robin, and Ivanhoe. Great stuff!

It's been a while since I plunged into a big fat novel that I couldn't get my nose out of. Was up till all hours this morning with the old "just one more chapter" syndrome. I'm so glad I surrendered to my sister Geni's coaxing about this one as I had actually returned it to her unread saying "life's too short" and "it looks too old-fashioned." There are reasons why books receive the hallowed title of "classic" including powerful plot, unforgettable characters, and mastery of the writing craft. Yep, Ivanhoe by Sir Walter Scott wins on all counts and more besides. It's a rollicking adventure romance set in the time of King Richard the Lion Heart and Robin Hood, both of whom feature in the tale. I'm a third of the way through and have granted myself the delicious right this rainy Sunday to lounge on the sofa and finish the book. Here is the most amazing thing about it: the heroine. Truly, this book could be called Rebecca. Given that Sir Walter Scott displays a pervasive anti-Semitism throughout - in offensive comments about the general nature of the Jewish people stated simply as if they are facts or general knowledge (no doubt a sign of his times and culture, yet not everyone throughout the ages fell prey to anit-Semitism so I let no one off the hook with that excuse) - it is astonishing that he has created such an amazing heroine in "the Jewess." Beautiful, brilliant, multi-lingual, steadfast, loyal, courageous, modest, practised in the healing arts, her virtues are inestimable and yet at all times believable as we can see she was forged like an exquisite blade from the persecution of her tribe. The scene in which she threatens to throw herself from the tower rather than be raped by Brian de Bois-Guilbert is spell-binding. And the patience with which she deals with the innate racism of the hero Ivanhoe - who is wholely indebted to her - is heart-breaking and only further adds to our admiration of her. Here's a thought. Might Sir Walter Scott have been quietly subversive and not anti-Semitic at all? There's not only the invention of such a heroine in the first place, but the tower scene contrasts directly with the behaviour of the Saxon princess Rowena who collapses into hysterics in a similar situation and Ulrica, the other Saxon noblewoman, who gave into her Norman captor for power and pleasure, becoming a depraved old hag. You have to wonder what Scott was up to. He does express sympathy for the persecuted Jews of England and we are encouraged to be concerned for Rebecca's father, Isaac, though he is depicted as a piteous and ignoble character. Might all the generalised comments on the avarice etc of the Jewish people be a smoke-screen - reflecting the attitudes of Scott's time - through which he presents the picture of outrageous persecution and the superiority of the Jewish heroine over every other character in the book, Saxon or Norman, including Ivanhoe? Hmm.
By OR Melling at September 06, 2009 1 comment:

Time to opt out. This is the day and the hour. I almost forgot but thankfully Access Copyright, of which I am a member, reminded me. The whole thing is utterly ridiculous. How did matters progress from the question of Google digitising orphaned works - perfectly acceptable given that nobody owns them and they would otherwise be lost forever - to suddenly digitising EVERYTHING on the planet! And since when did American law suddenly apply to EVERY COUNTRY on the planet! Bizarre. We already have established copyright laws in all publishing territories. This kind of carry-on only serves to undermine them. Done and dusted. I filled out the form. I'm out.
By OR Melling at September 04, 2009 No comments: