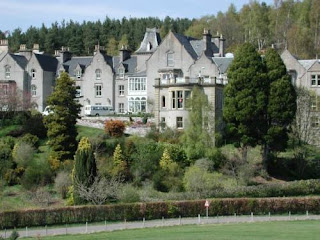 Just back from my Experience Week at Findhorn in Scotland. Here's where I stayed - Cluny Hill College on the edge of Forres, a beautiful Scottish town not far from Inverness. (Do I have a thing for big houses and castles or what?) Will tell more about that amazing week in future blogs. I am still a bit shaky as I managed to pick up a major bug while there. More anon.

As I've mentioned in my personal Blog, I am off to attend Experience Week at the Findhorn Community near Forres, in northern Scotland. Can't wait! This is research for my adult novel - People of the Great Journey - as one of my characters, a retired British Army officer, is a gardener at Findhorn. (I've got all kinds of odd sods and bods in this book.) Findhorn is a sister community of Auroville, in Tamil Nadu, India, which I visited many years ago. (Another character in the book is associated with same.) Once upon a time, I was a member of the Meitheal Community on Inch Island in Co. Donegal, which was a 'daughter' community of Findhorn, being much smaller in size. In fact, I mention Meitheal in The Hunter's Moon, in the scene where Dara and Gwen have a picnic by the sea. Did I call us old hippies?
By OR Melling at March 19, 2009 No comments: 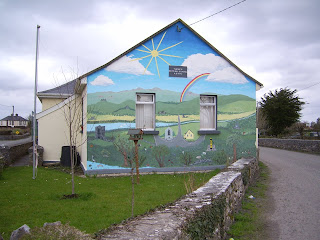 Well, I tried to post a Toyota ad of an Irish dancing pedestrian light but I couldn't. I don't usually post ads on my Blog but it's worth seeing; almost as good as the Guinness ad about the lads bringing the barrels of beer to the Aran Islands which, alas, is not to be found on youtube. Some of the most creative minds on this planet are wasted on the advertising business, but that's a personal choice made, no doubt, for monetary reasons. Which leads me to the hilarious comment made by writer and wag Brian Leyden over the weekend in Co. Clare (see my personal blog). We were all commenting on the fact that the Celtic Tiger had raced past us with little or no effect and Brian said, "we were always in the trenches, it's just that shelling has resumed." In lieu of the Irish dancing lights, here's a pic of a mural on the side of a little school house in Co. Clare. (PS found it! See my personal Blog.)
By OR Melling at March 17, 2009 No comments: 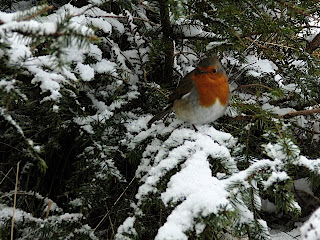 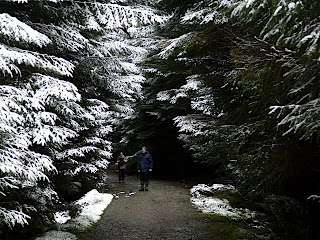 Not long back from a big hike through Glendalough with Ger, Frank and Paul. We started near the Upper Lake and headed off towards Mullacor and then back down An Spinc. It was a rainy, sleety, snowy, sunny day (you get all seasons in a day in Ireland). When we stopped for lunch, it was like eating in a snow globe. I had my usual flask of Earl Grey tea, plus bagel with Emmenthal cheese, toasted sunflower seeds with soya sauce (try it, yum) and an organic apple; but I was seriously missing my standard two bags of crisps and a chocolate bar! (See Blog for Roman Catholic explanation.) This darling robin appeared out of nowhere, looking for a bit of lunch also, and we happily obliged. A snowy Glendalough is, of course, one of the settings in The Light-Bearer's Daughter. The mountainsides were cloaked with snow. The faint tracery of small animals, hares and birds, inscribed the ground. A winter's sun shone palely. (Photo credit: Ger Blake.)
By OR Melling at March 08, 2009 2 comments:

Here's an interesting video one of my readers alerted me to. (Thanks Ariel!) I don't know this singer or the group she originally belonged to - Nightwash - but I'm going to look into them. The eye make-up is a bit much and some of this is seriously camp, but I like the fairy tale element and the woods. It reminds me of Dana being attacked by the Oakmen in The Light-Bearer's Daughter.