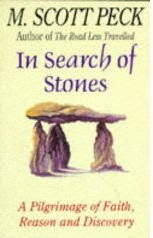 I enjoyed Scott Peck's The Road Less Travelled, though I found his People of the Lie lacked true insight and was a tad ridiculous in places, e.g. including a woman patient who resisted his treatment in his examples of 'evil.' Bad case of projection there, methinks. Imagine my surprise when I discovered that he shares my obsession with megaliths! I've made two serious pilgrimages to megalithic sites along with close friend and Jungian psychotherapist, Dr N. We visited numerous here in Ireland one year and then headed off to the Orkney Islands and the Outer Hebrides for another search several years later. The latter trip brought us, like Dr Peck and his wife, to the incredible and mysterious Callanish Stones, an important element in my new adult work. What I like about Scott's book is his recognition of and apparent reconciliation with his shadow. He does not present himself as a hero, but shows himself with all his warts. Interesting to see that the physician cannot heal himself. He appears to have serious addiction issues around alcohol, cigarettes and sex. I rather like this about him. Most psychotherapists, New Age healers and anyone else writing non-fiction personal growth and self-improvement books present themselves as paragons, living the kind of ideal happy lives they are attempting to sell. Not our Dr Peck. He is quite human.

Magic in the Mountains 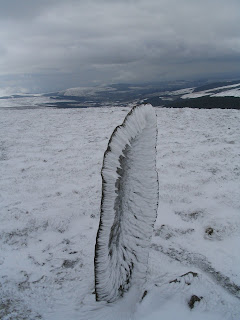 Here is a story my brother Kevin tells about an experience he had in the Wicklow Mountains. I'm including a photograph of the stone itself, which he took in 2005. The tale will reveal that a certain sensibility expressed in my books is shared by others (indeed, I would say all) in my family. "One day while rambling on my own in the Wicklow Mountains, I decided to climb Tonelagee, the third highest mountain in the chain. While I was climbing, a dense fog descended. The fog was so thick that I could only see about three feet in front of me. I was near the top of the mountain and was very aware that dangerous cliffs were nearby. For a moment the mist thinned and I briefly glimpsed a tall man in dark robes about twenty feet away. I walked toward the apparition but the fog closed in again. When I got to the point where he should have been, I found a thin flat Standing Stone about three feet high and two feet wide. The Stone is about five feet away from the cliff edge. I turned and walked the other way as the fog lifted." Some members of my family believe the vision was of a Druid. I believe it was St Kevin, after whom my father and brother were named, wearing monkish robes. Afterall, the Wicklow Mountains are also called St Kevin's Way, as they cradle Glendalough which was his holy place. (Yes, that's St Kevin in The Light-Bearer's Daughter.)
By OR Melling at November 13, 2009 7 comments:

I blogged earlier this year about the amazing artist's residency I enjoyed at the Franciscan Friary in Multyfarnham. Two weeks of writing in a lovely room in the cloister, sharing delicious meals with the Friars, up at the crack of dawn for Mass in the stone chapel with beautiful stained glass windows, sharing meditation and prayer with the Friars, playing Scrabble in the evenings with the other artists, walking in the gardens, and more writing writing writing. This month there will be an arts festival at the Friary and many of the artists who participated in the residency over the past years will be taking part. There will be an art exhibition, performances and readings, a symposium discussing spirituality and art, and workshops of every sort for young and old. If you are anywhere near the area or if not if you can get there anyway - Mullingar is the nearest centre, not too far away - it would be well worth a look. The admission is FREE. (That's Franciscans for ya.) Have a look at the fabulous website. It tells you all about it: www.strayingclosertoMulty.com.
By OR Melling at November 09, 2009 2 comments:

The sun was setting below the horizon. A dusky light suffused the air. Along the main road, fires burned in steel barrels to provide heat and light. The streets of Creemore were crowded with witches, goblins, vampires, fairies, princesses and warriors, all trooping from house to house to collect their due. Grinning Jack-o'-lanterns flickered with orange light on every porch. Paper skeletons dangled in the windows. Shrieks and howls rang through the night. There were plenty of adults in costume too. The first full moon on Halloween in fifty years was due to rise. Everyone felt the magic. (The Book of Dreams)
Those of you who have read The Book of Dreams know that Halloween plays a big part in the finale of the Chronicles of Faerie series. It's no coincidence. Samhain - the winter feast and the beginning of the Celtic New Year - is the most important date in the Celtic calendar. At this time the veil that separates our world from the Otherworld grows so thin as to be non-existent and the ancestral dead and the Faerie Folk walk among us. (Yes, that's where all the dressing up comes from!) When a full moon occurs at the same time, as it happened this year and as it does in my book, things get all the weirder.
By OR Melling at November 02, 2009 No comments: