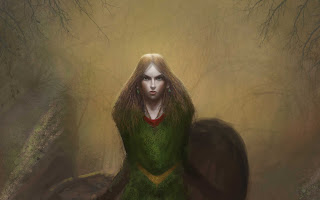 With three contracts signed, sealed and delivered it's time to make the Big Announcement. In fact, my agent - the amazing Marianne Gunn-O'Connor - has already posted the news in Publishers Marketplace, so this is an echo. Yes, my new YA series has legs at last and will be out next year in Canada with Scholastic, in Japan with Shogakukan, and in the United States of America with Penguin Putnam. Very exciting! Stay tuned for who will publish it in the UK and other territories. The Celtic Princess is a mythological adventure series about the 16 year old daughter of the High King of Tara who strives to be a warrior to avenge her father's murder. She is helped by a handsome slave-prince and her beloved wolfhound. I'm also developing the story as a graphic novel. Here's some early artwork from the gifted James Brady, blogged with his permission (copyright: Jim Brady).
By OR Melling at April 25, 2010

Congratulations and well down, it's about time that the world gets to see your stories, always knew it would happen, love Rose

Thanks, guys. But, um, Rose I do already have eight books out there in the world, so this is not a new thing.(Check out my website.)

Well done! Although, as you mention, it's not huge news, but it's good news nevertheless. Regarding the graphic novel, have you heard about Roisín Dubh? Looks interesting. Here's a link.

i`m a japanese girl.so,new books also publish in japan is very well! i read your celtic
series many times.someday,i hope to go Ireland.

I think it may be out in Japan first! So you can tell me if you like it after you have read it. :)